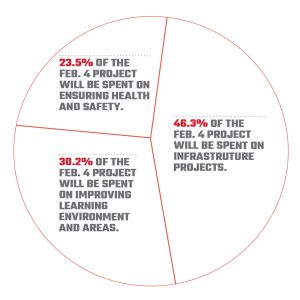 Why are we doing this now?

The OESJ community approved a $24.016 million capital project in December 2016. That project received 98% state aid reimbursement because of the December 2012 merger of the Oppenheim-Ephratah and St. Johnsville school districts. The December 2016 project added an auditorium to the elementary school, an agriculture and technical classroom to the Jr./Sr. High School, renovated four science classrooms, did roofing work at both schools and relocated classrooms at both schools. Those projects are nearing completion.

To complete those “large” projects, the district used its “maximum cost allowance” with the state to ensure that the full 98% state aid would be received back to OESJ.
That “maximum cost allowance” with the state has now been partially replenished due to the completion of the current construction, allowing for this smaller $9.4 million proposal to receive the full 98% state aid as well.

Why weren’t these proposals done in that larger project?

The district wanted to pursue the larger objectives mentioned above in that previous project, thereby exhausting the state’s “maximum cost allowance” to ensure OESJ would receive its full 98% state aid
reimbursement.

Could the Feb. projects have been added to the Dec. 2016 project?

Yes, but then taxpayers would have paid the difference because the state would not have funded the 2016 project at the 98% reimbursement rate. The “smaller” items in this proposal, if they had been added to the previous proposal, would have prevented the district from receiving its full 98% state aid reimbursement, resulting in a cost to the taxpayers. This “smaller” project is the last opportunity for OESJ to capture the 98% reimbursement from the state. That aid incentive expires in 2023.

No. In fact, unlike many of its neighboring school districts, OESJ’s total enrollment increased by 11 students this school year. Total district enrollment now stands at 769.

No cost to us? Isn’t the state’s “aid” still our tax money?

Yes it is. However, the state Legislature every year allocates state “foundation aid” for schools. Beyond that, when a school district approves a capital project similar to the one for February 4, additional “building aid” is sent to the school district to pay for part of that construction.

In OESJ’s case, because of the 2012 merger, 98% of approved capital projects are reimbursed through “building” aid. That higher reimbursement expires in 2023. If OESJ didn’t use that state “building aid” funding, another school district would use it.

If approved on Feb. 4, paperwork would be filed with the state Education Department this year with the hope of beginning construction in the spring of 2021. Construction would be completed in 2023, the same year the 98% incentive expires from the state.

What if the project is defeated on Feb. 4?

Items such as aging fire alarms, roofs, water and sewer lines, bus lifts, windows and failing boilers do not get better – they get worse. OESJ would continue to spend money repairing those items to keep them functioning. The district would b forced to pay for those items out of its annual budgets or propose another capital project in the future. However, that project would only get 60+% reimbursement, versus the 98% reimbursement the state is willing to give us now.

Where do I vote on Tuesday, February 4?